Posted at 17:15h in Marketing, Online Marketing by Abra Marketing

In December 2012, Abra Marketing embarked on a very special project that says a lot about us as an agency. We were approached by Ben Brown, owner of PHAS3 Martial Arts to help with a press release. He had achieved the honor of being the first coach in North America to be certified by muay thai coach Jongsanan “Woodenman.”

The Significance of Jongsanan “Woodenman”
Jongsanan “Woodenman” (previously known as Jongsanan Fairtex) is one of the most legendary fighters and coaches of the sport of muay thai, the national sport of Thailand. He was one of the most prolific champions during what many consider muay thai’s golden era of the 1990s. One of his fights – known as “The Elbow Fight” is considered one of the greatest fights of all time. Since retiring as a fighter he has become famous as a coach. He has coached many champions including Gilbert Melendez with whom – as of this writing – he is appearing on the current season (Season 20) of Fox Sports’ The Ultimate Fighter.

A Meeting of Muay Thai Legends 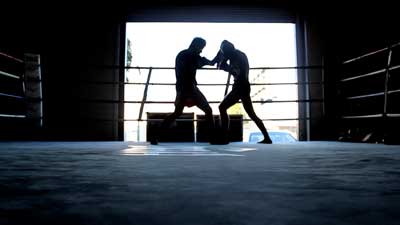 At the time that PHAS3 Martial Arts was chosen to become the first Certified Woodenman muay thai school, Monlit Sitphodaeng was also going to be in town, visiting from Thailand. Monlit was Jongsanan’s coach during his fighting heyday and is recognized as one of the greatest muay thai coaches in the world, receiving the honor of Thailand’s Muay Thai Coach of the Year in 2010.

Given the significance of this honor and that this would be a rare opportunity to have legends Jongsanan and Monlit in the same place, we recommended that in addition to doing a press release it would be a great opportunity to get some video of these two greats and some of their insights into the sport. We also wanted to get Ben Brown’s thoughts as he received this unique honor.

Very quickly into filming I could not help but think there was a greater project presenting itself. The things that were being said were not just powerful in and of themselves, but presented a fascinating spirituality in juxtaposition to the outward brutality of the sport.

Hearing the things that were being said as we filmed, I decided to do a documentary for two reasons:

1) First, one of the things I love about marketing is it’s ability to transform people’s lives for the better. When you can connect someone to something important that they were previously not aware of – that truly changes their life – that is incredibly rewarding. Most people’s opinions of muay thai/MMA fighting are negative and rightfully so based on a lot of what we see on tv: macho, brutishness and violence for entertainment sake. But there was another side that was being revealed that was much more about love, respect and pushing yourself to your human limits for a spiritual gain.

2) Second, I wanted this story to be told, both for the sport of Muay Thai and also to showcase all three of these great teachers.

Below, the Trailer for “Win. Lose. Forgive.”

As a marketing agency, of course there was a marketing strategy here as well. We could create an important piece of art, but we could also connect PHAS3, Jongsanan, Monlit and muay thai to new audiences through this vehicle.

I have to add the project was also just one of the coolest things I’ve done in my marketing career.

I had the idea early on to create a custom soundtrack which we built on the audio of training at El Nino Training Center, the Buddhist Temple and the voiceover from the film. We also added cello from Suellen Primost to parallel the layer of spirituality over the roughness of the gym.

The film premiered to a packed house at Downtown Santa Rosa’s Third Street Cinema. It was also selected for the 2013 Wine Country Film Festival. The crowd at the Festival was treated to a special muay thai demonstration that culminated in an exhibition fight between Ben Brown and seven-time world kickboxing champion Rick Cheek

The film is now available to view online at the links below.

The Win. Lose. Forgive. Soundtrack is available on iTunes and CD Baby:
http://www.cdbaby.com/cd/winloseforgive